She was just 15 when she arrived at Auschwitz — on the same convoy as the famed French jurist and feminist Simone Veil, who became a lifelong friend.

PARIS — Before long, they will all be gone. Survivors, perpetrators and bystanders alike, the generation that experienced one of the greatest horrors in modern history is dying out.

For decades, the Holocaust — the extermination of 6 million Jews and many others during World World II — has been Europe’s point of reference. It is the justification for an “ever closer” European Union and the go-to argument for maintaining the political status quo, no matter how deficient. “Never again,” the saying goes, would the continent descend into state-sanctioned racism and systematic murder.

Even if that credo has failed to prevent other genocides, what happens when there is no one left in Europe who really remembers the Holocaust? In the twilight of their lives, some survivors are increasingly anxious about the world they will leave behind, even with memorials and museums around the globe commemorating the slaughter. Far-right movements, many say, are no longer merely relics, and anti-Semitism has returned with a vigor few anticipated, especially in Europe.

“I’m extremely worried,” said Marceline Loridan-Ivens, a flame-haired 89-year-old filmmaker, writer and Holocaust survivor who has become something of a public conscience in France, where her memoirs are instant bestsellers. The latest installment, “L’Amour après” (“Love After”), published this month, recounts her experience in and after the Auschwitz-Birkenau concentration camp, where she was sent in 1944.

“All I can say is that everything I can write, everything I can unveil — it’s my task to do it,” she said, sitting in her apartment on the top floor of an old building in the tony Paris neighborhood of Saint-Germain-des-Pres.

At the same time, she said, she is under no delusions about the power of public testimony to fend off another catastrophe, especially in a country where, in the last presidential election, 34 percent of voters ultimately backed a party founded by a convicted Holocaust denier and where incidents of anti-Semitic violence are common.

Just this month, in Paris, a kosher supermarket was firebombed. Last year, an Orthodox Jewish woman was killed in her bed by a neighbor who then hurled her body from the third-floor balcony of her Paris apartment. Prosecutors have demanded that the killing be recognized as an anti-Semitic act.

“Nothing protects us,” Loridan-Ivens said.

Sociologists and historians agree, noting that the testimonials of living Holocaust survivors could not even keep genocide from recurring in Europe, in the form of the ethnic cleansings that accompanied the Bosnian War in the early 1990s, much less anywhere else. In the words of the writer David Rieff: “Since 1945, ‘never again’ has meant, essentially, ‘Never again will Germans kill Jews in Europe in the 1940s.’ ”

Still, the passing of so many survivors — and perpetrators — represents a major shift in ­Europe’s public consciousness, said Michel Wieviorka, a French sociologist who has written about racism and anti-Semitism. Wieviorka’s grandfather, the ­Polish-born writer Wolf Wieviorka, died at Auschwitz.

“A page is turning,” he said. “The disappearance of those who lived in Auschwitz is not to say that the work of memory won’t continue — it will continue, just in different forms. Memory, which fluctuates and sometimes changes, will soon become history. At the same time, we lose something powerful — the force of persuasion in contemporary debates.”

Holocaust survivors, drawing on their experiences, have often been able to intervene in other political and social debates, sometimes succeeding in shifting public opinion.

This week, dozens in Israel implored Prime Minister Benjamin Netanyahu not to carry out a planned deportation of African asylum seekers. In Britain, Alf Dubs, a peer and veteran of the Kindertransport, persuaded the government to welcome more unaccompanied child refugees, as he once was. And in France, the Nazi hunter Serge Klarsfeld, whose father also died at Auschwitz, torpedoed a controversial plan to republish the anti-Semitic pamphlets of the writer Louis-Ferdinand Céline.

“I don’t know what will happen to Western Europe,” said Klarsfeld, 82, in a telephone interview, echoing Loridan-Ivens’s unease. “Faced with a migrant crisis, the extreme right is on the rise everywhere. And of course, if Europe falls to the extreme right, the situation of the Jews will become unbearable.”

“But today,” he added, “we have the unfortunate blend of an inherently anti-Semitic far-right, a radical Islamism hostile to Jews and an extreme left that attacks Israel and Jews who support Israel.”

Aside from politics, museum professionals and educators worry that something else is at risk when survivors die: nuance.

“People often reduce the Holocaust to a morality tale, where the evildoers are only evil, and the victims are somehow only martyrs pure of soul,” said Edna Friedberg, a historian at the U.S. Holocaust Memorial Museum in Washington. “Survivors have the credibility to look at some of the uncomfortable crevices in stories and not to make everything so simple.”

Explicating those uncomfortable crevices is part of the purpose of “L’Amour après,” Loridan-Ivens said. She does not conceive of her latest book as a “Holocaust memoir” in the traditional sense, but rather as the story of a body — a Jewish body but also, profoundly, a female body — surviving catastrophe and learning to love.

She was just 15 when she arrived at Auschwitz — on the same convoy as the famed French jurist and feminist Simone Veil, who became a lifelong friend. She had never seen her own mother naked, much less a naked male or female stranger, she said.

Soon, she said, her own body began to mature, in the surreal nightmare of a Nazi concentration camp, which took its toll. “My female body was drawn at the same time as it was condemned,” she writes in the book. “What to do with it once I had survived?”

Zoe Waxman, a historian at Oxford University who has written extensively on gender and the Holocaust, said that a “long reluctance” has prevented scholars from viewing life in concentration camps as an experience of sexual violence.

“Shaving heads, women being forced to undress, lewd remarks — that was certainly a form of sexual assault, and was experienced as such,” she said.

Breaking this silence, Loridan-Ivens said, is her principal project. In that, she contributes to a venerable body of writing in French by female survivors. The first of these works was probably Olga Lengyel’s “Souvenirs de l’au-delà,” which appeared as early as 1946, but better known is Charlotte Delbo’s “Auschwitz, et après,” written in 1946 but first published in 1965.

But Loridan-Ivens said she hopes to draw particular attention to the aspect of assault: “I hope to formalize what was never said, and what nobody ever talks about today — which I find entirely unacceptable, as someone who participated throughout the 20th century in many women’s fights, especially for abortion.”

In 1975, Veil, then the French health minister, championed the law that legalized abortion in France. Veil died last June, a beloved national hero. (“I saw in her the same spirit of rebellion that I have in me,” Loridan-Ivens said).

On a broader level, the passing of so many survivors — and the memories they embody — could also affect Jewish identity in Europe, Wieviorka said. “I think the specific theme of the Shoah will occupy a less central place in Jewish life,” he said.

As the gray afternoon light streamed into her apartment, the filmmaker sighed. “One day, I won’t be here anymore,” she said, adding that she hopes her book will communicate a final message: “You do not have the right to break the lives of others. A human being that you encounter is not at your disposition for whatever you like.” 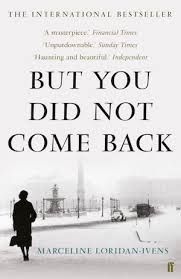 A runaway international bestseller, But You Did Not Come Back garnered rave reviews and features on hardcover publication, including a New York Times profile on the author. Hailed as an important new addition to the library of books dealing with the Holocaust, it is the profoundly moving and poetic memoir by Marceline Loridan-Ivens, who at the age of fifteen was arrested by the Vichy government’s militia, along with her father. At the internment camp of Drancy, France, her father told her that he would not come back, preparing her for the worst. On their arrival at the camps, they were separated—her father sent to Auschwitz, she to the neighboring camp of Birkenau. The three kilometers that separated them were an insurmountable distance, and yet before he died in the camps, he managed to send her a small note, a sign of life that gave Marceline hope to go on.

In But You Did Not Come Back, Marceline writes back to her father. The book is a letter to the man she would never know as an adult, to the person whose death overshadowed her whole life. Although her grief never diminished in its intensity, Marceline ultimately found a calling, working on behalf of many disenfranchised groups, both as an activist for Algerian independence and a documentary filmmaker.

And now, as France and Europe face growing anti-Semitism, Marceline feels pessimistic about the future. Her testimony is a memorial, a confrontation, and a deeply affecting personal story of a woman whose life was shattered and never totally rebuilt.