The article below shocked so many people when it was published that many of us decided to get even more active in our Advocacy to protect all the animals sharing our planet.

If you see anything suspicious call 911 or report the incident to the Washington Fish & Wildlife number 1-877-933-9847. The Woodland Park Zoo is doing major outreach to inform people of the horror of poaching here in Washington.
Elk, Black Bear, Cougars, Bobcats, Deer, Turtles, Sea Cucumber, Salmon, Sturgeon, Geoducks are being taken at record levels.
Visit the Woodland Park Zoo to see the new interactive exhibit and hear about the challenge and what you can do to help. ( Photo below is of the new interactive exhibit at the Zoo)

‘”It started when state officials wanted answers about the headless deer turning up in the Oregon wilderness east of Mount Hood.

“Nearly every year, it seems we have deer showing up minus their heads at the end of seasons,” Craig Gunderson, a senior trooper with the Oregon State Patrol, recently told the Seattle Times. Authorities believed the mutilated animals might be the work of poachers, so in November 2016 they fixed motion-triggered cameras in the national forest near The Dalles, Ore., smack on the Washington state line.

The footage troopers caught would prove to be the first clue to uncovering what officials now say was a loosely linked poaching ring responsible for the illegal brutal slaughter of hundreds of animals in Washington and Oregon. The sheer size of the animal body count involved has shocked wildlife officials, in part because of the wantonness driving the rampant killing.

“It was kind of a demented social club,” an Oregon official told the Times.

“I consider it a killing spree,” a Washington Department of Fish and Wildlife chief told Fox 12. “I’m completely disgusted.”

In the end, it was not just the camera footage from the forest that helped investigators unravel the alleged ring but pictures and videos saved on the suspects’ own cellphones. According to the Times, investigators found dozens of images detailing the poachers’ work, including videos of pack dogs running down and gnawing on bears, the suspects posing with the dead carcasses of elk, and the hunters splattered in the blood of recent kills. Between the two states, 17 people have been charged with more than 200 misdemeanors and felonies. None of the accused have publicly commented on the charges.

“Most people, when they kill an animal, there’s respect for everything. They take the hide, they take the meat and there’s something that’s respectful about it,” Washington Department of Fish and Wildlife Captain Jeff Wickersham told Fox 12. “In this case, it’s all about the thrill. They’re going out there and killing to kill.”

Back in November 2016, the motion-triggered cameras did catch poachers in the act, the Seattle Times reported. Images showed individuals in a Toyota truck in the national forest throwing a spotlight into the wilderness — finding animals in the dark by catching their eye glow in the flash of light, an illegal hunting tactic known as “spotlighting.”

When wilderness officials went to the spot where the truck had been caught on camera, they discovered another headless deer.

On Dec. 3, Oregon troopers spotted the truck and pulled it over. The two men inside — William J. Haynes and Erik C. Martin — admitted to killing two bucks and taking the heads back to Washington, the Times reported. When authorities searched Haynes’s home, they found a freshly cut deer head in the garage and 12 additional heads in the back yard, some in plastic bags, some rotting with maggots. In total, officials confiscated 27 deer heads from the property, according to the paper.

Evidence on the suspects’ phone would point investigators to at least 20 kill sites in the wilderness where illegal poaching had taken place. Text messages showed the suspects had planned out their illegal hunts and reveled in the opportunity, authorities say.

“You ready to kill everything?!” one alleged poacher texted another in November 2015, according to investigators.

Authorities say the poaching crews often conducted their hunts in the middle of the day, with lookouts posted for authorities. “They all knew what they were doing was illegal,” Gunderson, the Oregon trooper, told the Times. “They all thought it out ahead of time and had plans. Some of them had been doing it for years.”

Haynes and Martin were among the 11 defendants charged this week in Wasco County, Ore., with misdemeanors related to the poaching, according to KOIN 6. They have yet to enter a plea in the case and it is unclear if they have attorneys. Charges related to the ring have also been filed in Washington counties. So far, two of the 17 defendants have pleaded guilty to hunting-related violations, the Times reported.

But investigators also admit to being stumped by the bloodshed.

“For some, it was about ego and bravado — who could kill the biggest, the most,” Gunderson said to the Times.

“This particular violation really lays down the foundation that it was people killing animals to kill animals,” Wickersham, of the Washington Department of Fish and Wildlife, told KOIN 6.  “There was really no other motive behind it other than these individuals wanted to kill.”

To support our Animal Protection advocacy, or to donate towards our endangered species project see these links: Universal Giving  or PayPal Giving Fund 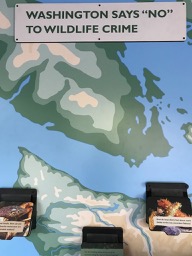