As a major port state, Washington is a thoroughfare for animal shipments both legal and illegal. Now it has an enthusiastic, four-legged weapon against smugglers.
Photos were taken at the Woodland Park Zoo during a training session with staff and volunteers. The Zoo is  a active partner with Fish & Wildlife to combat illegal trade in the state. Visit the Zoo to see our new interactive exhibit on the challenges to wildlife in Washington state,

“With his paws perched against towering stacks of furniture, Benny forced his snout between two Saudi Arabian sofas and found a piece of elephant ivory that his handler had hidden as part of a drill.

Smugglers trafficking in elephant ivory — one of the most common illegal animal products shipped to or through Washington — are no match for Benny, the state’s first wildlife detection dog. The sleek Labrador retriever’s strong sense of smell helps wildlife and U.S. Customs and Border Protection officers seize some of the illegally-trafficked animal products that pass through the state’s ports of entry.

The cargo in the warehouse along the Duwamish Waterway has not yet officially entered the United States.  It’s stored here until it can be inspected for potential consumer safety threats, intellectual property concerns and wildlife-trafficking violations, according to Customs spokesman Jason Givens.

Benny is certified in detecting elephant ivory, bear gallbladder, shark fin, firearms and spent casings, and will soon be certified to detect rhino horn. Wendt said pangolin — the most trafficked mammal in the world — may be the next addition to Benny’s resume.

Illegal wildlife trafficking is the fourth largest transnational organized crime in the world, and the U.S. is a prominent consumer in the black market of wildlife trade, according to the Department of State.

As a major port state, Washington annually sees approximately 5,000 wildlife shipments, both legal and illegal, according to John Goldman, who supervises U.S. Fish and Wildlife Service inspectors in the Pacific Northwest.

Goldman said he has seen a surge in illegally trafficked animal products used in “higher-quality” traditional Asian medicine, including protected species of sea horses, pangolin scales, bear gallbladders and pills and plasters made with leopard.

“A growing affluence in Seattle, Vancouver, Canada and Portland has created a demand for wildlife products traded on a scale that our staff is challenged with,” Goldman said.

The federal wildlife inspection program relies on support from Customs and the state Department of Fish and Wildlife — and now, Benny’s well-trained nose.

The two-year-old dog stands tall as he sniffs up a stack of crates, before he dashes off to the next potential treasure site. Following Wendt’s hand, Benny weaves through pallets stacked with goods in a fraction of the time that it would take officers to go through the shipments.

When Benny hits on something, he pauses to give a more thorough sniff — as if to double- and triple-check — before sitting down to indicate a discovery to Wendt.

Sometimes, however, Benny struggles to control his excitement. “He’s a Lab, so he wants to put his mouth on everything,” Wendt said.

Wendt found Benny at a shelter in May 2017, and evaluated him as having a good foundation for a detection dog.

“You look for how willing he’d be to work for his toy or food,” Wendt said, noting that Benny is more motivated by toys than treats.

After finding a gun in a stack of crates, Benny sat facing the item he had been trained to identify.

Sitting still is difficult for the energetic dog, but Benny knows that it will lead to a game of tug-of-war with his handler. “It’s his paycheck, so to speak,” Wendt said.

During Benny’s initial training, Wendt hid a toy and a target wildlife product together and trained Benny to sit once he found both. She would eventually remove the toy, with his favorite orange ball only appearing once Benny sat down in front of the target. Their training games have since evolved and Benny now learns odors more quickly. 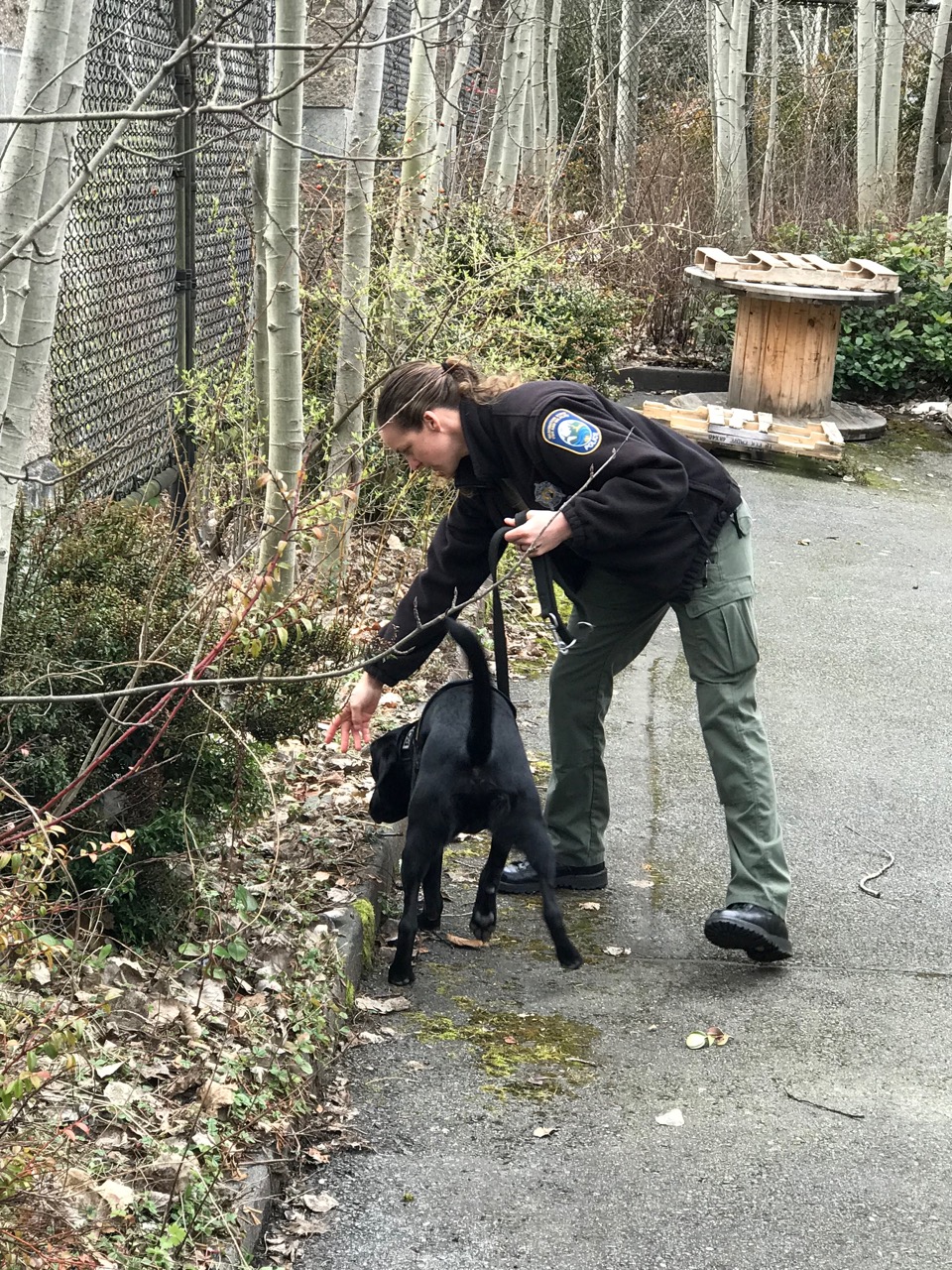 Wendt and Benny completed 220 hours of training to receive their detection canine certification in September. That included 80 hours of handler training for Wendt.

“The dogs usually pick it up fast. It’s usually the humans that need more training,” she said.

Washington voters overwhelmingly approved a law to criminalize the sale, purchase, and trade of 10 species — including elephants, lions, and tigers — in November 2015.

This was the first voter-approved wildlife trafficking law in the nation, with legislative and outreach efforts spearheaded by the Woodland Park Zoo, the Seattle Aquarium, Point Defiance Zoo & Aquarium, Northwest Trek and the Humane Society of the United States — and bankrolled by Microsoft co-founder Paul Allen’s $2 million donation.

To enforce this new mandate, Wendt approached her agency with the idea of training the state’s first wildlife detection dog.

When Customs suspects illegal wildlife product  in cargo — sometimes based on shipping paperwork or previous trafficking violations from a location — they can call on Benny and Wendt to make their rounds.

The pair mostly searches imported household goods, but they also assist the U.S. Fish and Wildlife Service with inspecting known shipments of wildlife for illegal products. More than 39,000 African trophy animals — including 15 white rhinoceros and nearly 200 elephants — have been legally shipped through Seattle since 1999.

Though he is state-owned, Benny serves both the state and federal wildlife agencies.

Starting in 2019, the state Legislature will provide $300,000 annually to the Department of Fish and Wildlife to hire two new enforcement officers who will focus on the trafficking of exotic and native species and to fund other efforts, such as training more dogs like Benny, according to the agency’s legislative liaison Raquel Crosier.

“We have a lot of native species that it’d be great to have a dog trained in,” Wendt said.”

To report poaching violations or suspicious activity, call the state Department of Fish and Wildlife crime hotline at 1-877-933-9847.