“PÁTZCUARO, MEXICO — Atop the highest hill in this lakeside town sits the Basílica de Nuestra Señora de la Salud, built in the 1500s with whitewashed walls and red stone columns.

On a street around the corner from the basilica, a wooden door framed in carved stone and marked with a cross fleury stands open from 9 a.m. until 2 p.m., and again from 4 p.m. to 6 p.m. “We pray for you,” reads a sign on the door in Spanish.

Inside, the room is sparse and dark save for a wooden window and three locked doors. Behind them is a convent, home to two dozen nuns of the Dominican Order.

But the convent also hosts an even larger number of very unexpected residents: a thriving colony of endangered salamanders. Scientists call them Ambystoma dumerilii, but the nuns and everyone else in Pátzcuaro call them achoques. 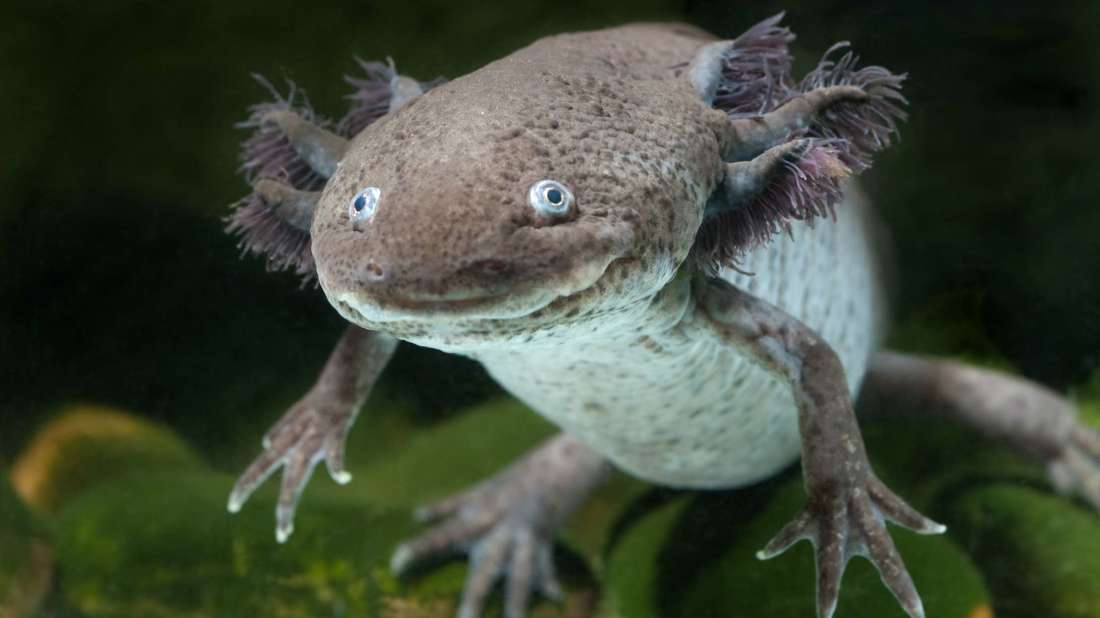 Carefully tended by the nuns, about 300 achoques live in glass aquaria and white enamel bathtubs lining the walls of a long hallway and two adjoining rooms in the convent. The nuns support themselves partly by selling a cough syrup called jarabe made from the salamanders’ skin.

But the basilica’s achoques are increasingly valuable for another reason.

They are found nowhere but Lake Pátzcuaro, and outside the convent their numbers are falling fast. There are smaller captive colonies elsewhere in Pátzcuaro, but none as large as the one in the basilica. It may be critical to the salamanders’ prospects in the wild.

“That is why we consider that the nuns will be very vital in the future,” said Gerardo Garcia, a curator and expert on endangered species at the Chester Zoo in England. 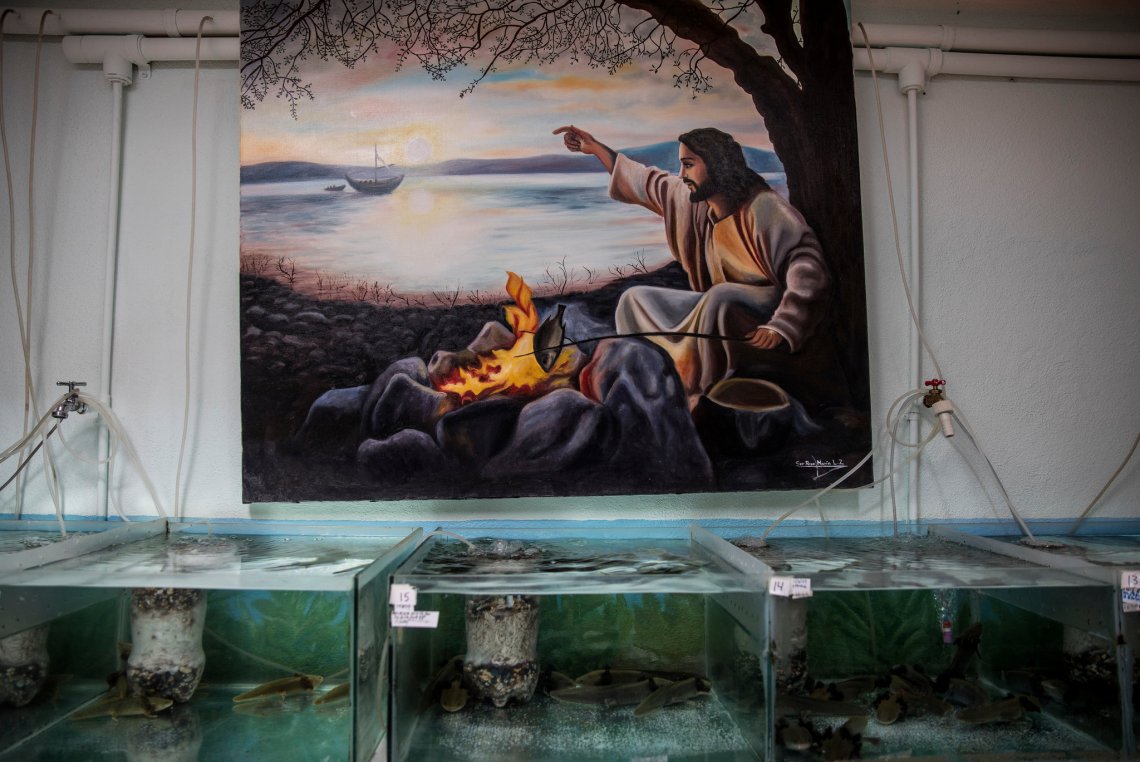 The salamanders themselves are wondrous little monsters with granular skin the color of Dijon mustard. They resemble miniature versions of the flying dragon-dog Falkor in “The Neverending Story.”

As salamanders go, they’re huge — the largest ones approach a foot in length. But most striking are their gills: luxurious, ruddy filaments that frame their heads like manes and undulate gently in the water.

In the basilica, their main caretaker is Sister Ofelia Morales Francisco. On a recent visit, she greeted a visitor in a white habit, her black veil crisp and pinned in place, a blue-beaded rosary dangling by her side. 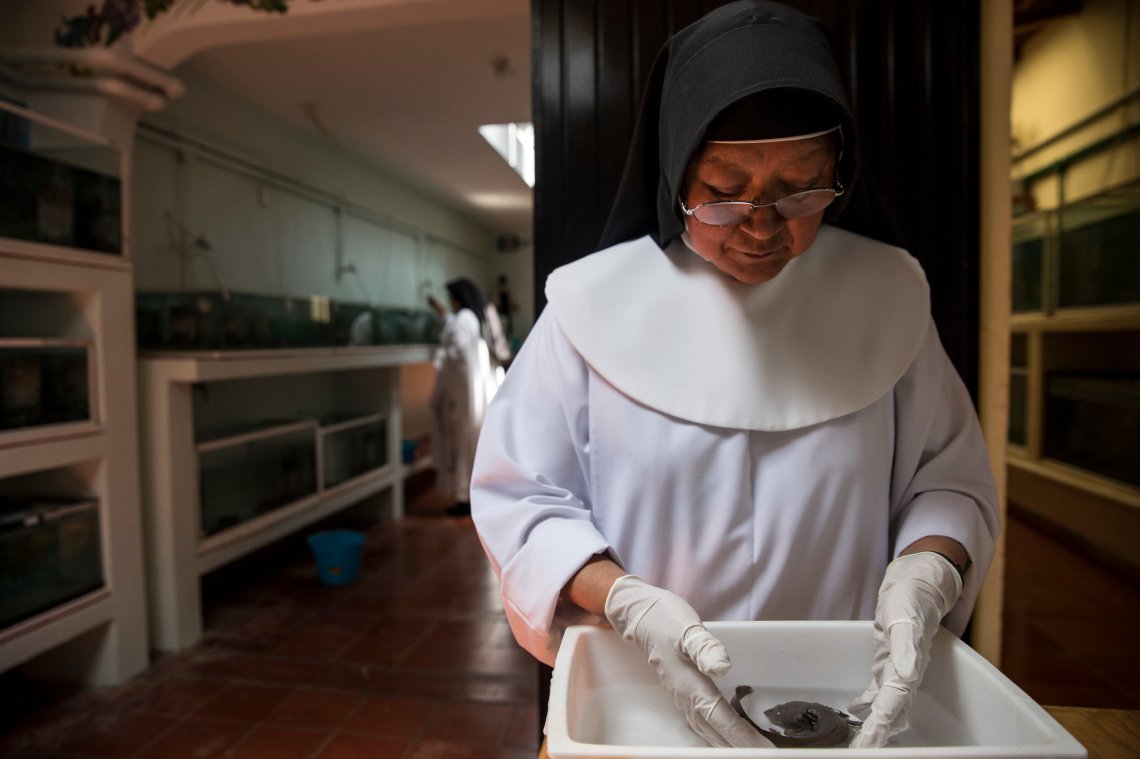 Asked a question, she sometimes answered only with a small smile. But around the achoques, she opens up, proud to show off her amphibious charges.

Their tanks are spotless, each with a bubbling aerator made from half of a plastic soda bottle filled with stones and coiled fabric. In a glass case above the tanks, a baby Jesus dressed as a doctor keeps watch.

The sisters used to make their syrup using salamanders collected from the lake. When they began to disappear, the nuns established the convent’s colony because they were worried about losing the jarabe business.

“What would we do — not make any syrup?” Sister Ofelia said in Spanish. But eventually she and the other nuns also came to recognize a conservation imperative in their work.

“It’s about protecting a species from nature,” she said. “If we don’t work to take care of it, to protect it, it will disappear from creation.”

Like axolotls, their flamboyant, better-known cousins, achoques live their entire lives underwater. As adults, they keep the external gills that most salamanders have only as aquatic larvae.

As the number of people living around Lake Pátzcuaro, one of the largest in Mexico, has steadily increased over the centuries, the water quality has suffered.

Runoff exacerbated by deforestation carries silt and pollution into the lake. Untreated sewage is still dumped into water, and an invasive hyacinth spreads along its shores. Cow pastures extend right to the lake’s marshy edges.

To make matters worse, largemouth bass intentionally were introduced into Lake Pátzcuaro in the 1930s, and in 1974 the much more destructive carp were brought in. They eat the eggs and larvae of the achoques.

Between 1982 and 2010, the already shallow lake declined by about 13 feet, losing a quarter of its total volume because of declining rainfall and increasing runoff carried into the lake. Various efforts to rehabilitate Pátzcuaro have met only limited success.

Achoques aren’t the only Mexican salamanders in trouble. Of the 17 species in their genus found in Mexico, 12 are listed as endangered or critically endangered by the International Union for Conservation of Nature.

Worldwide, salamanders face numerous threats, from habitat loss to the illegal pet trade. A new fungus has been killing salamanders in Europe.

At Lake Pátzcuaro, fishermen have been catching and eating achoques since before the Spanish arrived in Mexico. In the late 1970s and early 80s, achoques caught in the lake were piled high at the fish market in town, recalled Brad Shaffer, a professor of biology at the University of California, Los Angeles, who has studied the salamanders.

But the numbers of achoques started to fluctuate wildly in the 80s and crashed in 1989. In 1985, a friar suggested that the nuns start their own colony because the lake was deteriorating, according to Sister Ofelia.

It wasn’t until 2000 that the nuns had their own thriving community of salamanders in the convent. The nuns have been cooking up jarabe, however, for nearly a century.

“People have faith in it because the nuns make it,” said Dolores Huacuz, an expert on the region’s amphibians and a retired university professor.

Local legend has it that the sisters got the secret recipe from a young Purépecha woman, one of the indigenous people who lived in this region before Spanish colonization.

Her jarabe cured one of the sisters, strengthening her lungs and abolishing her anemia. And the identity of that young woman, according to the story: the Virgin Mary herself, in disguise.

Whether or not the cough syrup recipe came to the nuns through divine intervention, there’s no doubt that the Purépecha people were eating achoques and using them for medicine long before the arrival of Europeans and Catholicism, according to Tzintia Velarde Mendoza, a project coordinator at Faunam, a wildlife conservation group, who has studied the cultural history of the achoques.

The name achoque is from a Purépecha word — achójki — possibly derived from the term for mud.

Dr. Garcia, of the Chester Zoo, has been working with a team based in Mexico to survey Lake Pátzcuaro to try and figure out how many salamanders are left in the wild, and where in the lake they live.

“Jumping into reintroduction programs looks very sexy in the media for one press release, but that’s really not the best way to do it,” Dr. Garcia said.

There are still wild achoques left in the lake, Dr. Garcia said, including a small population in the northern part of the lake. Fishermen have told Dr. Garcia’s team that they do occasionally spot the salamanders.

But as the population has thinned, so has its genetic diversity. That’s where the convent’s thriving colony may one day make an enormous difference — assuming it is genetically diverse itself.

At the moment, however, there are no plans to move achoques from the convent to the lake. Before that happens, the water quality issues must be addressed, Dr. Garcia said, and the genetic diversity of the nuns’ colony must be assessed. Work on both issues is ongoing, he said.

In the room where the nuns sell their cough syrup, a mural on the wall depicts the lake with salamanders swimming in clear waters. The glowing hands of a nun hold an achoque beside an image of the Virgin Mary.

“Being part of a religious order like ours is not an obstacle for scientific progress,” said Sister Ofelia.

“The order is devoted to the research of theological and scientific knowledge in benefit of humanity,” she added. Part of the order’s mission is “to work in favor of a more humane conscience full of love and justice for nature.”

Another mural bears the official name of the nuns’ Management Unit for the Conservation of Wildlife, registered with the Mexican government: Jimbani Erandi. In the language of the indigenous Purépecha people, it means “new dawn.”