Susan Casey is the author, most recently, of “Voices in the Ocean: A Journey Into the Wild and Haunting World of Dolphins.” 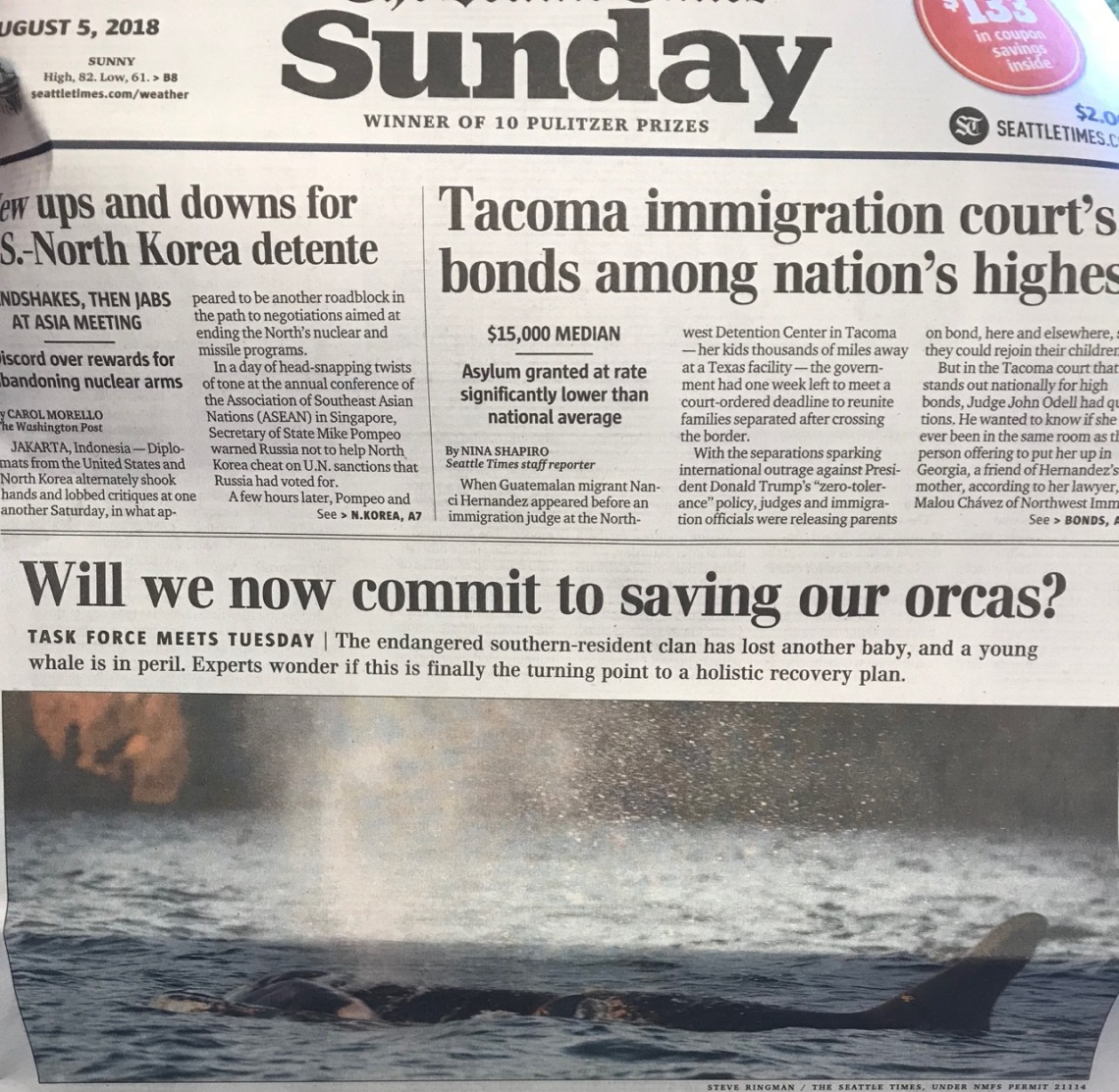 NY Times 5 August 2018
“Among the many quirks of human nature, one that has always struck me as particularly worthwhile is the tendency to project our own feelings onto other animals. This seems to me like a fast route to empathy, a way to bring us closer to different species. But many scientists disagree. They call this anthropomorphism, and they discourage it. They cringe when aviral video of a piglet apparently twerking to a Rihanna song inspires hundreds of comments praising the animal’s confidence, sense of rhythm and musical taste. What if the piglet is actually displaying aggression, albeit to a catchy beat? Is it dancing, or is the piglet freaked out? And who says Grumpy Cat is really grumpy?

Scientists offer these words of caution with good reason: There are a number of very valid arguments against anthropomorphizing the creatures with whom we share this world, not least of which is that their inner lives deserve to be evaluated on their terms — not ours. At times, interpreting their behavior through a human lens might be misleading, silly or even harmful. But at other times — and they occur more often than science would care to admit — perceiving ourselves in these others is exactly the right response. When an animal’s emotional state is obvious to anyone with eyes and a heart.

Such is the case with Tahlequah, also known as J35, a 20-year-old female orca from the critically endangered southern resident population based near Puget Sound, Wash. On July 24, she gave birth to a female calf, who lived for just 30 minutes. The calf was emaciated, lacking enough blubber to stay afloat. Tahlequah kept the body at the surface, supporting it on her head or holding it in her mouth. Orcas and other cetacean species have been observed carrying their dead, but rarely longer than a day. Tahlequah has been swimming with her daughter’s body through choppy seas for, as of Friday, 10 days and counting, on what social media observers and orca researchers call a “tour of grief.” They’re right.

To learn the orcas’ natural and cultural history is to understand how closely connected a mother and calf are, how tight-knit their bond. Like us, orcas are self-aware, cognitively skilled individuals that communicate using their pod’s signature dialect. Unlike us, their core identity is communal: It encompasses not just themselves, but their family group. The idea that Tahlequah is grieving her dead calf is not some sentimental projection. Science strongly backs it up.

Orcas are among the earth’s most socially sophisticated mammals. They live in matrilineal groups that might include four generations, with the oldest grannies running the show. Matriarchs have been known to pass the century mark; they’re one of just a handful of species, including humans, that goes through menopause. As with all of nature’s successful adaptations, there’s a reason for this: The matriarchs serve as midwives, babysitters, navigators and teachers. Orca mothers, grandmothers and great-grandmothers pass on so much essential knowledge that calves removed from their influence are as ill-equipped for wild orca life as children raised by wolves would be if dropped into Midtown Manhattan.

While we can never hope to fully grasp another species’ experiences, orca behavior and neuroanatomy point to a complex inner life. Their brains are impressive, bigger and more elaborated in some ways than the brains we consider the gold standard: our own. The orca’s paralimbic lobe is highly developed, as is its insular cortex, both of which relate to social emotions and awareness. Like the human brain, the orca brain contains von Economo neurons: rare, specialized cells that relate to empathy, communication, intuition and social intelligence.

So orcas feel emotions, however exotically, which in turn strikes an emotional chord in us. Yes, they’re smart, but our fascination with orcas and other cetaceans also stems from something more esoteric. On some level, we sense how connected we are. As with anthropomorphism, science balks at the notion that these animals affect us so profoundly because of some innate kinship — but that doesn’t make us feel it any less. When describing the many sublime characteristics of orcas, even the most rational scientists can begin to sound emotional. The marine ecologist Robert Pitman once called orcas “the most amazing animals that currently live on this planet.” Another scientist proclaimed them “the unchallenged sovereigns of the world’s oceans.”

But these days we’ve made such a mess of the marine environment that even its sovereigns struggle to survive. There are only 75 southern residents left, and without a major change in circumstance, their prospects are dim. They haven’t had a successful birth in the last three years. These whales contend with a host of stresses — pollution, development and industrial marine noise, to cite a few — but their main problem is malnutrition. The southern residents feed primarily on Chinook salmon; overfishing and habitat destruction have made those fish not just scarce but contaminated with everything from flame retardants and lead to Prozac and cocaine.

Heartbreak for Tahlequah is an appropriate starting point. In a way, it’s the easy part. What’s harder is turning our shared sense of grief for this mother into an impetus to solve the problems plaguing the dwindling southern resident orca population. If we aren’t willing to turn our empathy into action, then one day in the near future we will explain to our children and grandchildren how incredible the orcas were, and how bad we felt about their fate. How their pain resonated with us and caught our attention. How deeply we felt their loss. Just not enough to do what was required to save them.”

To support our Animal Protection advocacy, or to donate towards our endangered species project see these links: Universal Giving  or PayPal Giving Fund  http://smile.amazon.com/ch/20-5567039