“The Spinosaurus possessed a long, powerful tail. Paleontologists think the dinosaur used that to propel itself through water.

An enigmatic predatory dinosaur that lived in northern Africa about 95 million years ago possessed a long, powerful tail that may have propelled it through water, new fossils suggest.

If true, this beast, close to 40 feet long and not yet fully grown when it died, was a rarity: a dinosaur that swam.

“What we have here is a dinosaur that was not just a wader but an animal that was actively pursuing prey in the water column,” said Nizar Ibrahim, a professor of biology at the University of Detroit Mercy in Michigan.

In a paper published on Wednesday in the journal Nature, Dr. Ibrahim and his colleagues described the skeleton of Spinosaurus aegyptiacus — its name means “Egyptian spine lizard.” Long spines rose vertically from the bones in the 15-foot-long tail, forming a fin-like structure that, the scientists theorize, could undulate back and forth.

Think of it as a cross between a lizard and an eel — at the scale of a Tyrannosaurus rex.

“It’s an animal that really has no modern-day equivalent,” Dr. Ibrahim said. “You’re working on an extraterrestrial from outer space in many ways.”

In a water tank, the scientists showed that a plastic cutout in the shape of the tail was better at generating propulsion than the tails of other dinosaurs. The thrust and efficiency was comparable to contemporary aquatic creatures like crocodiles, the scientists said.

“In addition to the tail being weird-looking, it also made perfect sense,” said Matthew C. Lamanna, a paleontologist at the Carnegie Museum of Natural History in Pittsburgh, who was one of the reviewers of the Nature paper. 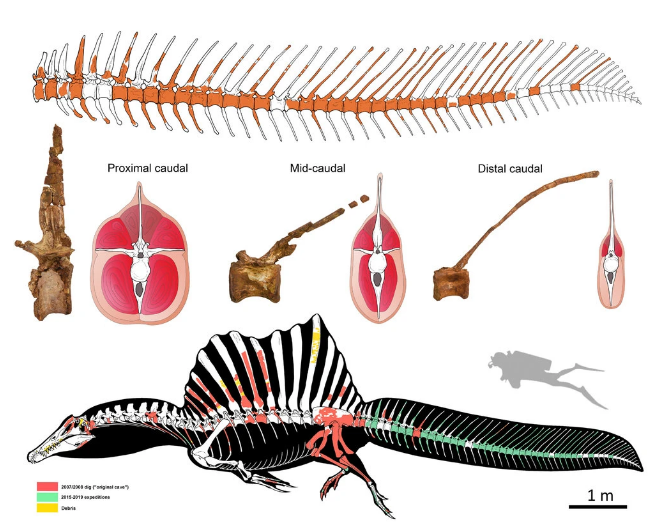 David Hone, a paleontologist at Queen Mary University of London in England, who was not involved with the research, lauded the fossil specimen. “We don’t have too many good dinosaur tails, generally,” he said. “It’s really quite weird in lots of ways, which is really interesting and really neat.”

But, he added, “I’m extremely unconvinced by some of the ecological interpretations that they placed on it.”

Dr. Hone said the small-scale experiments were intriguing, but that it was too much of a stretch to claim that Spinosaurus was a fast enough swimmer to chase down prey in the water.

“It’s not that they’re wrong,” he said. “It’s just I don’t think you can support that argument with the available data.”

Dinosaurs, which arose nearly a quarter billion years ago, ruled land on Earth for 180 million years and then, evolving into birds, they also ruled the skies. But for all of that time, dinosaurs appeared to stay out of the water. (Other reptiles of the era, like plesiosaurs and mosasaurs, did swim in the seas, but they were not dinosaurs.)

Spinosaurus is definitely a dinosaur. It’s classified among a group known as theropods, which also include tyrannosaurs and velociraptors.

But Spinosaurus was a strange theropod.

In 2014, Dr. Ibrahim described a well-preserved fossil unearthed in Morocco, arguing that it possessed features — crocodile-like jaws, dense bones that might have served as ballast, flat feet that resembled paddles — that seemed suited for life in water. Today, this region is the Sahara is the largest desert in the world. But in the days of the Cretaceous period, when Spinosaurus roamed, it was a vast system of rivers and lakes.

But not everyone was convinced that this dinosaur was truly aquatic. Scientists studied one incomplete skeleton that did not look like an adept swimmer, leading many paleontologists to presume that Spinosaurus lived a life similar to grizzly bears today: on land most of the time, occasionally wading into shallow water to snare some fish to eat.

“We didn’t really have a motor, a propulsive structure that would really plausibly demonstrate how this animal would actually move through the water,” Dr. Ibrahim said. “It was met with quite a bit of resistance, and that’s because there is a deeply entrenched dogma that essentially says dinosaurs never truly invaded the aquatic world.”

From 2015 to 2019, Dr. Ibrahim returned several times to the site in Morocco. “Little did we know that the most exciting part was still buried in the rocks when we described the first part of the skeleton,” he said.

The team removed more than 15 tons of rocks on a steep slope, persevering through sandstorms, snakes, flooding and 120-degree heat. Dr. Ibrahim recalled when they found a bone near the end of the tail that had a long spine sticking upward. “I just thought, ‘This is really weird,’” he said.

Unlike the tails of most carnivorous dinosaurs, Spinosaurus’s tail bones were not interlocked, and that suggests the tail could wiggle more, undulating back and forth in a snakelike motion.

To buttress that assertion, Dr. Ibrahim reached out to Stephanie E. Pierce, a professor of organismic and evolutionary biology at Harvard who reconstructs the motions of extinct animals.

Dr. Pierce and a Harvard colleague, George V. Lauder, who studies the biomechanics of fish, used an apparatus in which a two-dimensional piece of flexible plastic in the shape of the tail — about eight inches long, not life-size — was attached to a robotic arm lowered into flowing water. They measured the amount of thrust produced as the tail moved back and forth.

“It produced way more thrust than other dinosaur tails; more in line with what you expect to see in a modern semiaquatic animal like a crocodile or a salamander or a newt,” Dr. Pierce said. “Other theropod tails were horrible. They were inefficient.”

Donald M. Henderson, curator of dinosaurs at the Royal Tyrrell Museum in Alberta, Canada, said it was likely that Spinosaurus lived at the edges of water and ate fish — the grizzly bear lifestyle — but he remained doubtful that Spinosaurus was much of a swimmer.

“No way,” he said. “My first thing is, they haven’t actually demonstrated that this tail could produce enough force to propel a six-and-a-half-ton body through the water.”

What the researchers should have done, Dr. Henderson said, is taken the experimental results and scaled them to the full size of the dinosaur.

He said the researchers should have also considered whether Spinosaurus could have enough muscles to move such a long, heavy tail, and how much drag the giant sail on its back — its most characteristic feature — would have produced.

“You try dragging a big billboard through the water,” Dr. Henderson said. “It doesn’t work.”

He said the shape of Spinosaurus also appeared too buoyant and prone to tipping over, unlike the wider bodies of crocodiles. ““They haven’t properly addressed this capsizing problem,” Dr. Henderson said.

Dr. Pierce said Dr. Henderson did have a valid point, but the more detailed calculations are not simple. “This is definitely the first pass at this,” she said. “It’s going to ruffle some feathers. And I’m sure it’s going to lead to all sorts of cool analyses.”