Back when times were a bit less complicated I had a non human person pal named Sage.
She was my companion for about 12 years.
She was insightful, mischievous, kind, loyal, and much to my amazement, a late night scribe.
Occasionally, I noticed  things out of place on my desk, though I never imagined she was pounding away on the keyboard while I snoozed the night away.
The following is one of her tales.
June 2020

“Let me share a little about the human I share my life with…
There’s a lot I could tell you about him, but right now, I want to tell you the story of a fire fighter’s helmet.
OK, a little background.
One day my human friend reached up to the top of the bookshelf and retrieved a leather fire fighters helmet. It had been up there since before I arrived to organize and revitalize his life.
He called me over to look at it asking me if I thought the fire fighters family might like to have the helmet re-enter their lives. Rhetorical, of course, as I hadn’t yet shared my special gift of understanding speech with him.

Anyway, the helmet was obviously fairly old as it was weathered and cracked in spots. On the front was hand painted “Engine 23 S.F.F.D.” Under the neck flap, neck protector, whatever, was a name – Betti, with the number 005 hand painted just above the name.

“You know what Sage, I’m going to see if we can get this back to this man’s family.”
I panted appropriately before heading to nap in the sun. Hey, it’s Seattle! When the sun shines on our little garden I’m out there-

A little while later I heard him on the phone with the San Francisco Fire Department’s Museum where he asked all sorts of questions about the man Betti, and whether or not they had any suggestions on how he could track down anyone who could help him return the helmet to the family.
I knew he wasn’t getting anywhere, as he then called the San Francisco Public Library asking about archives, obituaries and whether or not they had any advice on researching this man, as he was coming up short everywhere.
He spent hours online, when he should have been looking to our company commitments, trying to find this Betti fellow in any records tied to the fire department in San Francisco.

After a couple of days of phone calls and endless searches online he gave up returning the helmet to the shelf.

Not much to go on…

About two weeks later he called me, “Hey Sage, I never looked into where Engine 23 was and if there are any clues there to follow.”
He jumped online to find out that Engine 23 had been an engine company in the neighborhood in San Francisco where he spent most of his youth.
A neighborhood that abutted sand dunes stretching west towards the Pacific when Engine 23 moved to it’s 3022 Washington Street in 1893.
Now he was off to the races.
Forget looking for income!
He was committed to finding out who this man Betti was and why the helmet was sitting on our bookshelf.

He got on the phone again and got a hold of a different person at the Fire Department Museum.
Whomever, gave him the name of the firefighter who acted as the Director of the museum when he wasn’t out fighting fires.
Himself dashed off an email that he read to me, as if I was going to be his editor. In it he explained that he had no idea how this helmet arrived in our little abode. He told the fella that the helmet had hung in their family cabin for years and finally came his way after certain items were distributed from the cabin after it’s sale some years before now. He couldn’t remember if he had ever heard why or how the helmet had entered their lives. He just shared that he remembered seeing it in the cabin as far back as he could remember.
He also told the man that he had never heard of, or known anyone, named Betti.

Prior to hearing anything back from the San Francisco Fire Department he did some research on the firehouse finding the following photo shot sometime after the firehouse, Engine #23, was disbanded, around 1953.
Engine 23 has been relocated out in the Sea Cliff area near the Pacific miles from it’s historic home. 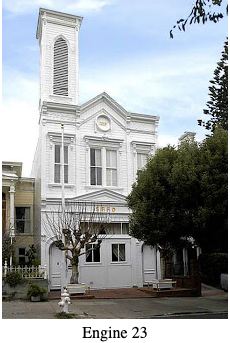 The purpose of the tower was to allow
Firefighters to hang the wet hoses up after a fire.
They would be hoisted up and hung
like tentacles to dry out before their next use…

In a couple of days my pal heard back from a firefighter named Mike who had gathered quite a bit of information on Mr. Betti.

With this information my human contacted the Administrative offices of the S.F.F.D. to determine if there were any family members who might be interested in receiving the helmet.
Mindy, in the Admin office, wasn’t initially hopeful she could locate the old records but said she would give it a shot as she thought the idea of returning the helmet was a great one, as she knew how much it would mean to family members.

Phone call after phone call, email after email, to all sorts of supportive people all engaged in trying to find if there was any family left to contact.

Mike, the fire fighter, shared in a phone call, how he was fourth generation S.F.F.D. and that he had no equipment from any of his family members, as they had all been discarded. When my friend asked if a helmet would be an important item to have back in a family, Mike conveyed, through the distance and phone, his emotions, as he choked out just how much it would truly mean.
When my friend hung up he had tears in his eyes-

I realized that this wasn’t going to end until Wild Mick, ( I’ll tell the story on his moniker some other time ), had found someone who could definitely tell him if there was any Betti family left to contact.

While waiting for responses from the Historical Society, California Fire Fighters blog members, San Francisco Chronicle and Examiner, San Francisco Library, S.F.F.D. Administration offices and Firefighters Mike, Paul, Terry and Bob, my friend tried to find a newspaper article on the fire at the St. Elizabeth Hospital, as it seemed that there would be coverage of a firefighter dying at a fire.
It became clear, after talking with one of the papers, that Alfred Betti dying of a heart attack at a fire may not be so newsworthy, though the archivist would continue to look for us.
Did I say us?
Yes, I was getting as excited as he was though not so much that I was going to blurt out any suggestions.

OK, a couple of days ago Firefighter Mike called telling my man that he had some more information on Alfred Betti that he would forward by email. The exciting thing was that Alfred had a son named Phillip who was presently living in Kihei, Hawaii.
Mike had called him, as did Mindy, though neither knew the other had found him.
Apparently, Phillip, aged 84, did not have anyone to leave the helmet to and would be pleased if my man would give it to the S.F.F.D.

Another email from Firefighter Mike revealed the following:
“Alfred married in about 1927, Carmel Ann Callaghan, born 7 Jul 1899, died 13 Jun 1986. Social Security says she died in Maui County, HI, but the California Death Index says that she died in Sonoma. Her SSN# was 559261217.
The 1930 census indicates that they had no children at the time.
Alfred had a brother named Leslie P. Betti, born 19 Nov 1904 in San Francisco and died 12 Apr 1967 in San Francisco. He married Myrtle L. Sparks.
There is a family tree that contains Leslie, but does not list any children for him.
I found an obituary, and it lists one child, Phillip R. Betti
Phillip R. Betti, born 26 Nov 1927…”

Yesterday my friend called Phillip in Hawaii.
Phillip told him that he had not thought about the days surrounding his father’s death for many years.
He said he was so happy that so many people in the S.F.F.D. were concerned enough to take their precious personal time to care so much about returning his dad’s helmet to him.
He told my friend that he had just returned from the Korean War when his pop died. He shared memories of hanging out in the firehouse watching the men string up the hoses in the tower. He told further stories of helping the firemen clean the truck. They allowed him to wear boots that came up to his waist.
He repeatedly told my friend how happy he was to be reliving these memories that had faded for so long. He told my human about moving to Hawaii and having a good life full of the usual ups and downs.
He said he was happy that he had been found and that the helmet would return to the S.F.F.D. to be put on display honoring his father.
After some silence my friend rang off.
He sat there staring out the window wiping tears away as they rolled down his cheek.

And you should wonder why I hang with this man-