“We are currently experiencing what some consider to be the Earth’s sixth major extinction event. It’s happening fast, and humanity is pretty understaffed when it comes to cataloging the species that seem to be going extinct every year — but scientists think it’s probably happening hundreds, if not thousands, of times faster than it did before humans started helping the whole process along.

“Around a third of all assessed species are at risk of extinction, and the majority of extinctions are caused by the impact of humans on the planet such as global warming, pollution and exploitation,” says Louise Gentle, senior lecturer in wildlife conservation in the School of Animal, Rural and Environmental Sciences at Nottingham Trent University in Nottingham, England, by email.

What Is a Lazarus Species?

But sometimes science loses a species and then finds it again. These are called “Lazarus species,” a reference to Lazarus from the Bible, who was raised from the dead by Jesus. Lazarus species can refer to organisms thought to be extinct, or absent from the fossil record after showing up for several geologic periods.

“A Lazarus species is one that seems to have come back to life,” says Gentle. “It is a species that hasn’t been seen for many years, so has been presumed to have gone extinct, only to be discovered at a later date.”

The Rules of Extinction

If we can announce that an organism is extinct and then be proven wrong later, how do we decide who’s extinct and who’s just hiding out?

“It is often difficult to say with certainty that a species has gone extinct,” says Gentle. However, the International Union for Conservation of Nature (IUCN) produces a Red List of the world’s biodiversity, whereby species are assessed based on information such as population size, distribution, rate of change in population, etc. Species are then put into categories ranging from ‘Least Concern’ to ‘Extinct in the Wild.'”

The IUCN defines “extinct” as when there is “no reasonable doubt that the last individual has died…. when exhaustive surveys in known and/or expected habitat, at appropriate times (diurnal, seasonal, annual), throughout its historic range have failed to record an individual.”

Here are five examples of organisms that science assumed, beyond reasonable doubt, to be extinct — but was wrong: 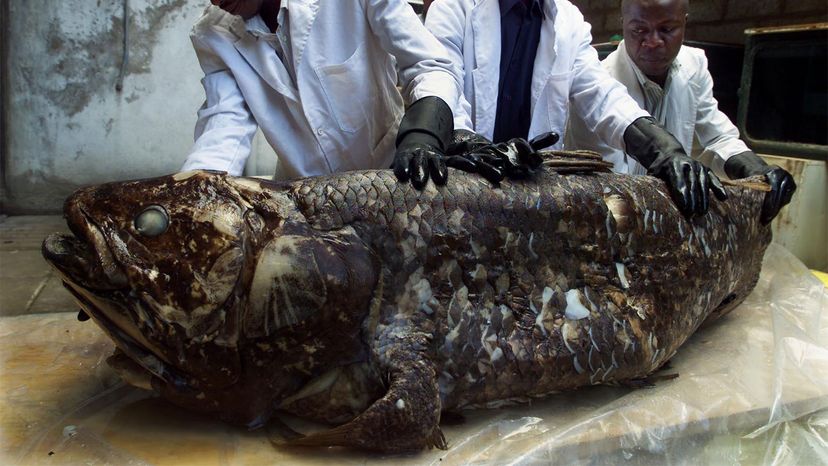 Members of the National Museum of Kenya display a coelacanth, caught by Kenyan fishermen off the coastal town of Malindi in 2001. The species was thought to have vanished with the dinosaurs 65 milllion years ago. SIMON MAINA/GETTY IMAGES

One of the most compelling and famous Lazarus species is the coelacanth, an order of four-lobed fish that was first discovered in the fossil record in the 19th century. The lobed fins of the coelacanth are thought to be precursors of the limbs of four-legged creatures, so when they showed up in 400 million-year-old rocks, these fish were celebrated as being the missing link between ocean and land animals. The last glimpse we get of the coelacanth in the fossil record is from 66 million years ago, so imagine everyone’s surprise when a live one was discovered in 1938 off the coast of South Africa! Since then, several live specimens have been recorded. 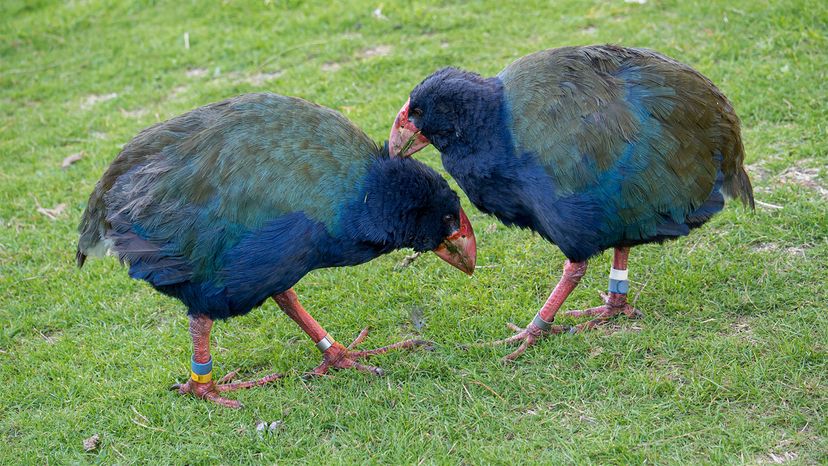 Two adult takahē (male on left, female on right) at the Zealandia EcoSanctuary in New Zealand.WIKIMEDIA COMMONS (CC BY 4.0)

The takahē (Porphyrio hochstetteri) is a flightless bird native to New Zealand — the largest member of the rail family. These beautiful, goose-sized blue-green birds have always been extremely rare, even when they were first discovered by European explorers in 1847. Only four specimens were found in the 19th century, and the man who described the species (after finding the second specimen) wrote “It is unlikely that any further living specimens will be found.”

But 50 years later, an amateur naturalist named Geoffrey Orbell, convinced the takahē was still out there somewhere, mounted a rediscovery campaign and succeeded in finding the bird on the South Island of New Zealand in 1948. 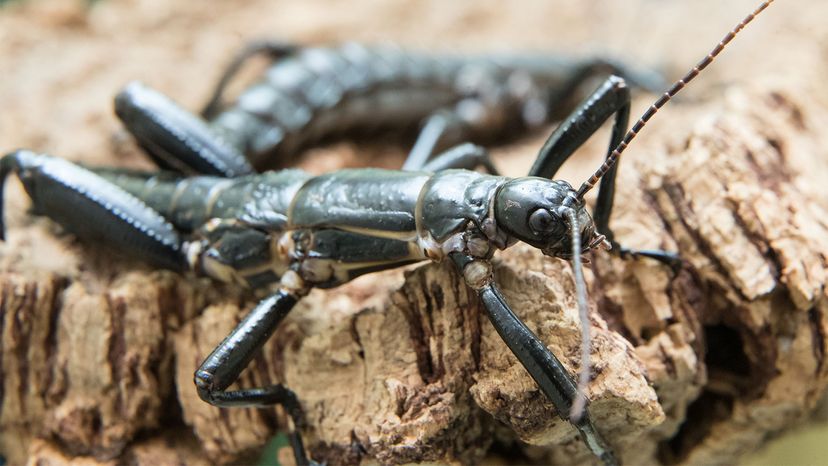 A pair of Lord Howe Island stick insects, one of the world’s rarest insects, which were bred in captivity at Bristol Zoo Gardens in Bristol, England.MATT CARDY/GETTY IMAGES

It’s pretty hard to miss an insect the size of your hand, but the Lord Howe Island stick insect(Dryococelus australis), or tree lobster, which was once common on the remote Lord Howe Island in the Pacific Ocean, were destroyed after a ship wrecked on the island in the 1920s. Rats aboard the ship went to work devouring the giant insects, and they were thought to have been entirely eradicated by the rodents until 1960, when a few fresh tree lobster corpses were found. It took until 2001 for scientists to discover 24 live insects, which were collected and bred in captivity. Researchers are awaiting successful eradication of the rats on Lord Howe Island before rereleasing the tree lobsters to their home. 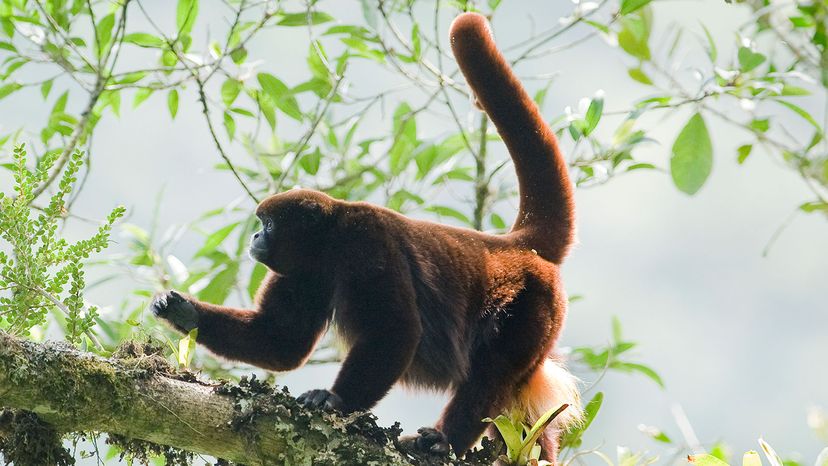 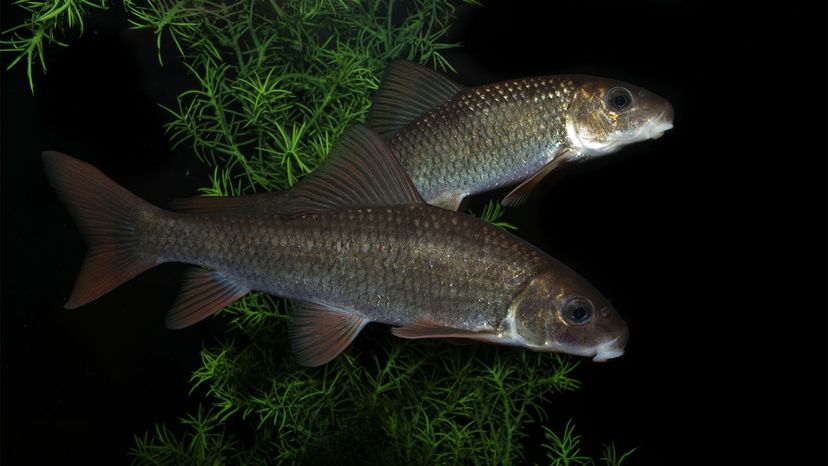 The robust redhorse (Moxostoma robustum) disappeared from public view for 122 years before being rediscovered in the 1980s.BRIAN GRATWICKE/FLICKR (CC BY 2.0)

The robust redhorse (Moxostoma robustum) is a stout fish with pale pink fins and a giant striated lower lip situated where you’d usually think a chin would go, native to the Atlantic slope out the Southeastern United States. It was first described by a European naturalist named Edward Drinker Cope in 1870 based on a single fish he found in the Yadkin River in North Carolina. That specimen was destroyed at some point, which was unfortunate because that one fish caught by Cope was the last one any scientist would see for 122 years.

Of course, during its century of absence from the public eye, the robust redhorse was thought to be extinct when anybody thought about it at all. But then in 1980, and again in 1985, strange fish with suckerlike mouths were caught out of the Savannah and Pee Dee Rivers in Georgia and the Carolinas. The specimens were sent to ichthyologists who took a few years to deliberate before finally announcing that this fish was the robust redhorse — back from the grave.