“As winter approaches in the Canadian Yukon, a few unusually late salmon runs can be found swimming red up rivers banked with snow. For more than five years, photographer Peter Mather has been following a unique subculture of grizzlies as they fish for those salmon well into November, when most of their kin have already settled down to hibernate. Mather calls them the “ice bears.”

“I first heard about these bears from an elder named Robert Bruce in the Gwich’in community of Old Crow,” Mather says. “The old people would say you couldn’t kill these bears because your arrow couldn’t penetrate the ice that coated their fur.” 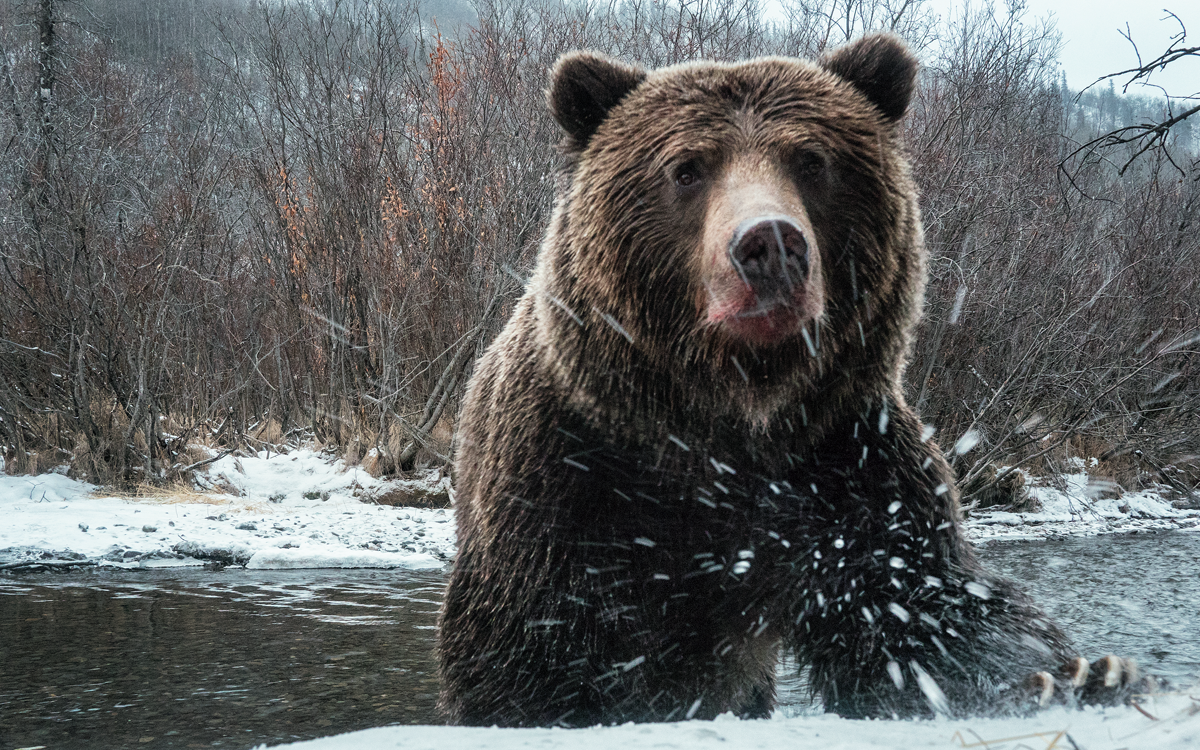 The “mayor of Klukshu” comes face-to-face with a motion-activated camera.

Mather was intrigued, but the spot Bruce told him about—where the bears congregate—was extremely remote. Eventually, in 2014, Mather sweet-talked himself into a massive discount on a helicopter ride to Ni”iinlii Njik (Fishing Branch) Territorial Park, a wilderness area that is jointly managed by the Yukon provincial government and the Vuntut Gwitchin First Nation. Once there, he found the legendary bears: out-of-season grizzlies fishing for salmon under the northern lights. 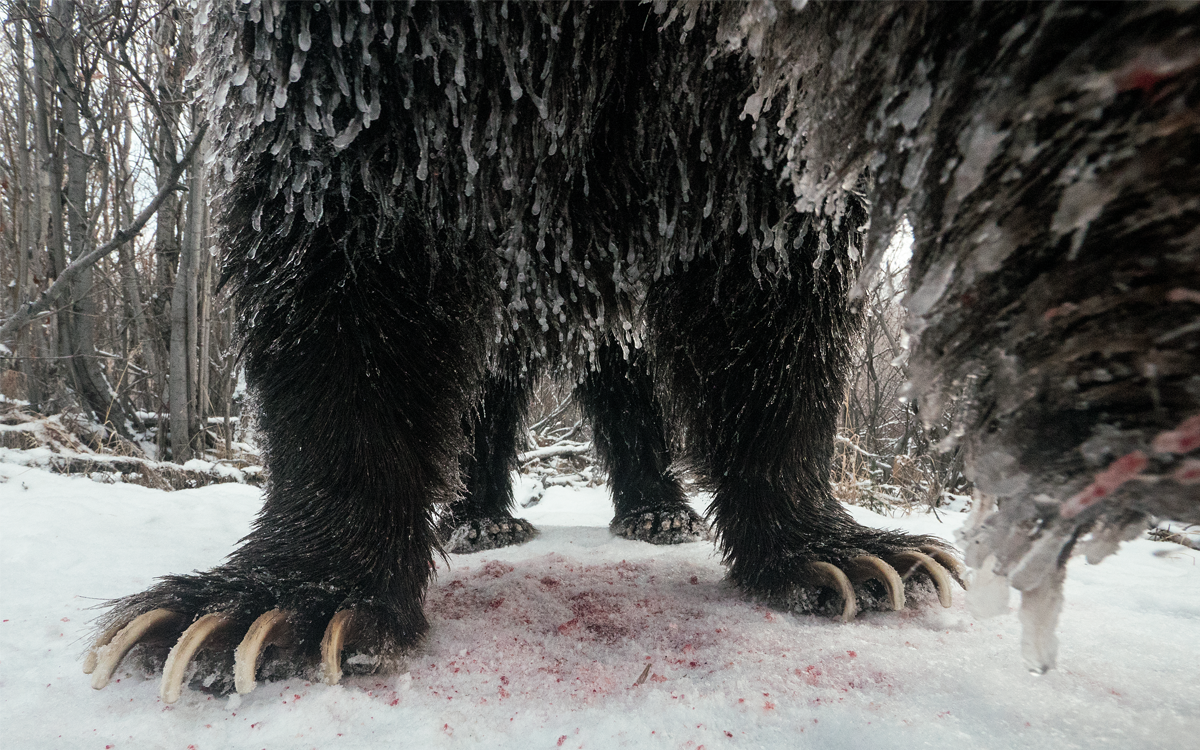 The mayor of Klukshu, the dominant grizzly in the area, inspects a remote camera in the forest of the Kluane region. Since the mayor is a large bear with a high metabolism that produces an immense amount of body heat, his fur only forms icicles during extreme cold snaps, when the temperature drops below 0°F.

Mather began to search for other, more accessible sites at which to photograph the late-fishing bears. The trick was to hone in on salmon spawning sites by following the food web. “I looked for eagles,” Mather says. “When you see 10 perching on one tree, you are probably at a spawning site.”

He found his own ice bear sites on the Kluane and Klukshu Rivers, east of Whitehorse, and began to photograph the animals every winter. At first, he struggled to tell individual bears apart. Chuck and Barb Hume—Champagne and Aishihik First Nations members he met in Klukshu Łu Ghą, a traditional seasonal fishing village—eventually taught him what to look for. 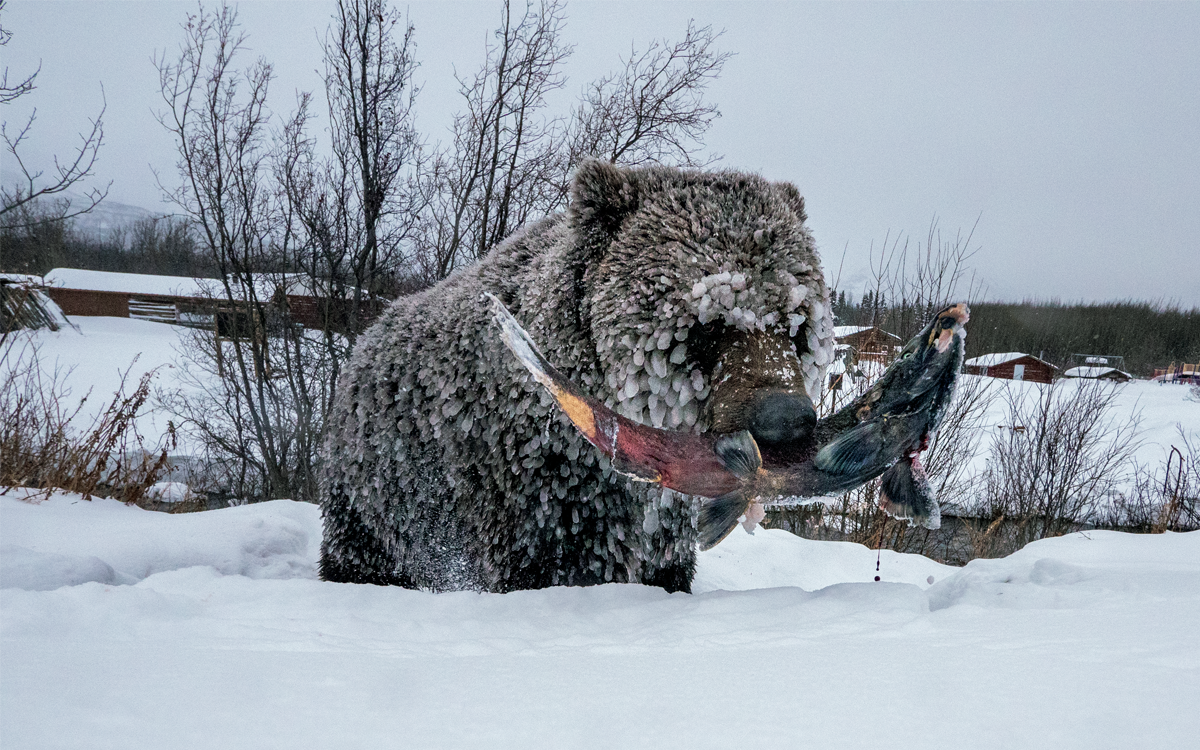 A small grizzly with a spawned-out coho salmon. The fishing village of Klukshu is on the opposite bank.

One bear, a behemoth the locals had nicknamed the “mayor of Klukshu,” had a close relationship with Chuck, who had “trained” him to keep away from the village, thus protecting the animal from being killed. “Chuck goes out with his gun and pushes him onto the other side of the creek,” Mather says. “Just kind of teaching him to stay on the ‘bear side’ of the creek.” Since the mayor is a large, dominant male, he also keeps other bears away. “There would be small bears and old bears that might cause trouble by wandering through the village, but the mayor holds that spot. It works extremely well.” Barb taught Mather to identify the mayor by his unusually pale claws—splayed on snow red with salmon blood, they look as large as bananas.

Another bear Mather got to know invented a way to use the subzero temperatures to his advantage. When the bear caught a salmon, he flung it up on the bank, letting the piercing cold freeze it to death. Later, he would gorge on frozen salmon sashimi. 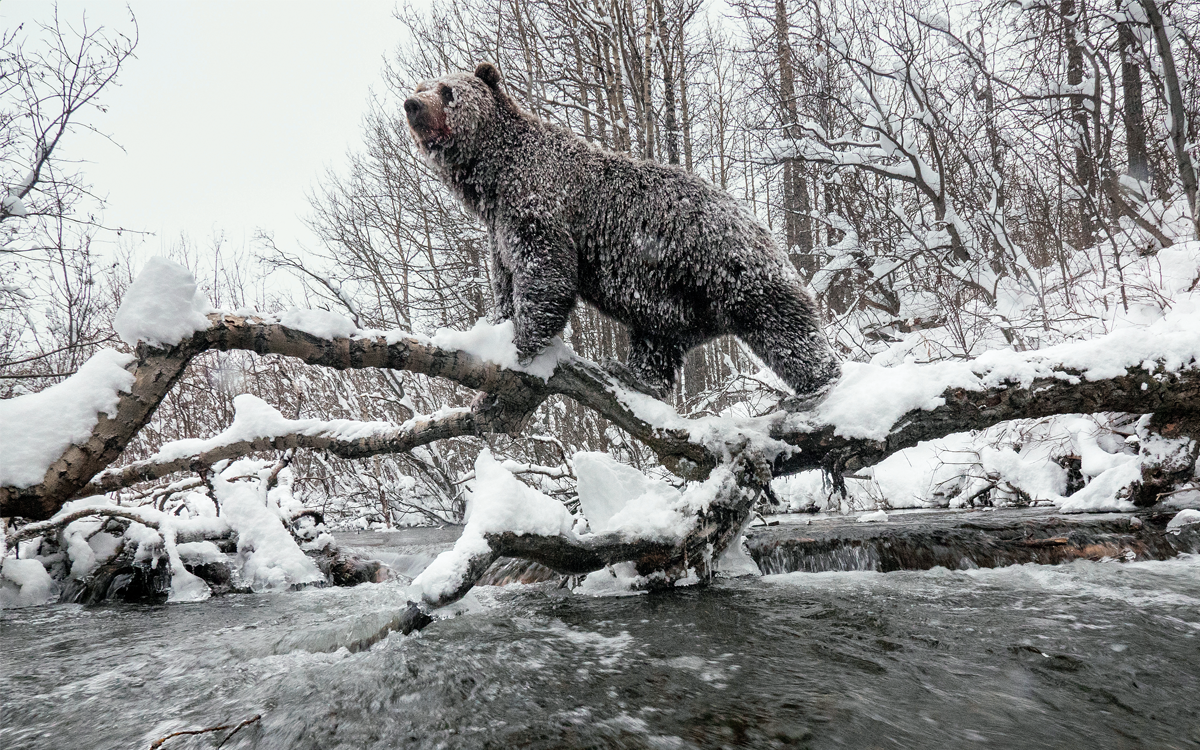 A grizzly uses a fallen tree to cross the Klukshu River in early winter. The headwaters of the Klukshu are a critical spawning ground for three salmon species: Chinook, sockeye, and coho.

“Bears are very similar to people,” Mather says. Indeed, a study of black bears conducted by Julie Young and Patrick Myers at Utah State University showed that some are shy and others bold, some bouncy and some more relaxed, and the same is almost certainly true of their larger brown kin.

These bears’ tradition of postponing hibernation represents a kind of ursine culture—a behavioral pattern unique to this population, presumably passed down from generation to generation. Beyond their shared traditions, these are smart animals with sharp wits and unique personalities. That one bear’s innovative salmon-freezing technique and the relationship between the mayor of Klukshu and Chuck Hume speak to the cognitive flexibility of individual grizzlies. 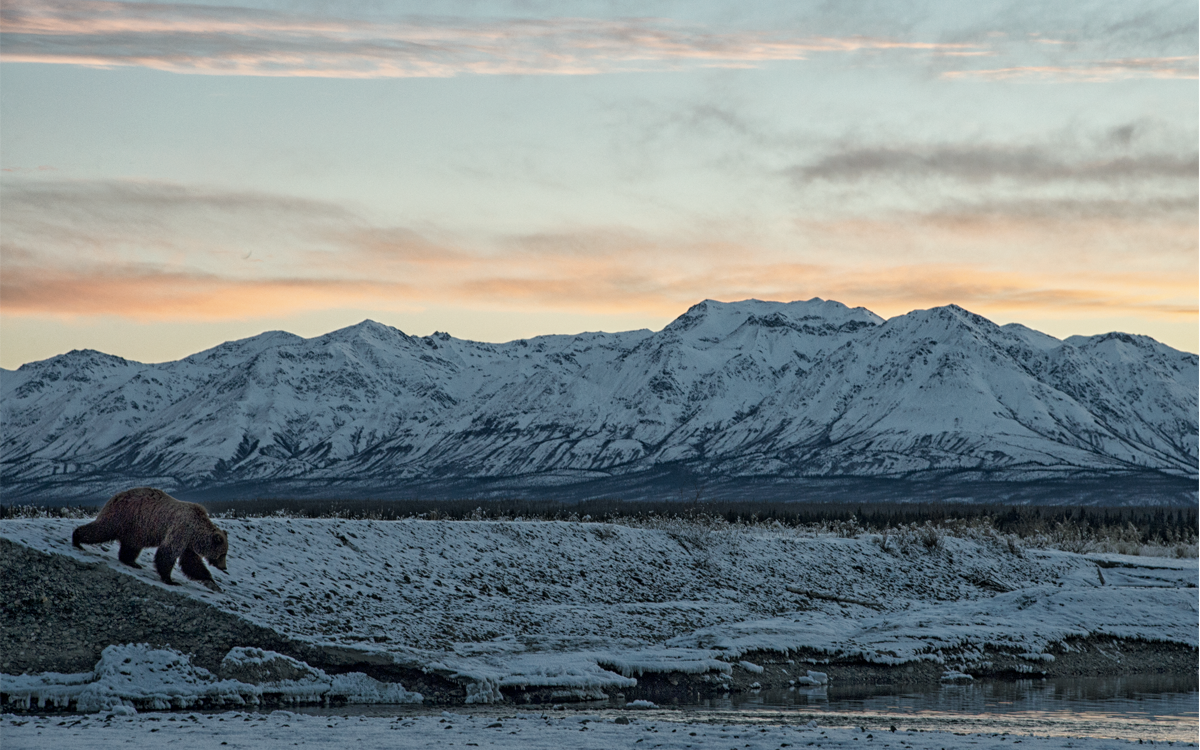 A light-colored grizzly approaches his fishing hole in the Kluane River beneath the Kluane Ranges. Before it was killed by a hunter, this bear would catch salmon and toss them onto shore, then later return to the riverbank to eat the frozen fish.

As the ice bears pluck blue-red salmon from the water, they bring nutrients from the ocean to the land in a pattern that has continued for millennia. Their bodies—from their impressive claws to their fur lacquered with ice—are built with these nutrients. When the salmon die in place, the nutrients stay in the local food web—in the bellies of local people, in the bodies of eagles and coyotes, in the microscopic life in the soil. This flow of energy is the heart of any ecosystem.

In these images, Mather captures the beauty of that flow—the heat of life against the coldness of the land, the movement of energy from salmon to bear. It is a timeless ritual. What makes Mather’s images special is the way he captures the personalities of the bears that enact the ritual in any given winter. Ecosystems may run on energy flow, but that flow runs through individuals with their own specific selfhood. In these photos, we are invited to meet them not simply as nodes in a food web but as bear people.”

My book “Friends” is a photo book of animals I have been fortunate to hang out around. The book underscores the importance of empathy, conservation, and honoring all our fellow creatures.

Net Profits from three of my books will be given to the Leukemia & Lymphoma Society, The Washington Talking Book & Braille Library, The American Cancer Society, the Woodland Park Zoo, and other organizations shown on our website www.letkidsbekids.org.