Scientists aim to determine whether a predator population can be restored in a place where it was hunted into extinction.

Emily Schmall is a South Asia correspondent based in New Delhi. @emilyschmall
Hari Kumar is a reporter in the New Delhi bureau. He joined The Times in 1997. @HariNYT

“KUNO NATIONAL PARK, India — Cheetahs once prowled India among lions, tigers and leopards. They appear in ancient Hindu texts and in cave paintings, and are woven into centuries-old tapestries. The Mughal emperor Akbar kept 1,000 cheetahs in his stables.

But for 75 years — the entirety of its existence as an independent nation — India has been bereft of cheetahs, the world’s fastest land animal.

That changed on Saturday, when eight cheetahs arrived in central India after a flight from Africa, initiating a great untried experiment for the world: whether a top predator population can be brought back to life in a place where it was long ago hunted into extinction.

The big cats arrived in India on Saturday on a Boeing 747 from Namibia. A military aircraft then took them to their new home, Kuno National Park, in a lush river valley where yellow butterflies fluttered over miles of greenery in the state of Madhya Pradesh. A huge convoy of politicians and supporters traveled to the remote park to welcome the cheetahs.

“It is the only large mammal that India has lost,” said S.P. Yadav, secretary of India’s National Tiger Conservation Authority. “It is our moral and ethical responsibility to bring them back.”

The plan to return cheetahs to India dates almost to the time of their extinction in the country, and it represents a bold and uncertain attempt to ensure their survival by redistributing them from Africa, where their population is in sharp decline.

The project also reflects the muscular nationalism of Prime Minister Narendra Modi, who is bringing to bear India’s growing wealth and scientific knowledge. The cats’ entry was timed for Mr. Modi’s 72nd birthday, which he celebrated on Saturday by releasing them into a soft enclosure at Kuno. The cheetahs scurried out of their cages, appearing disoriented.

“Along with these cheetahs, the nature-loving consciousness of India has also awakened with full force,” Mr. Modi said. 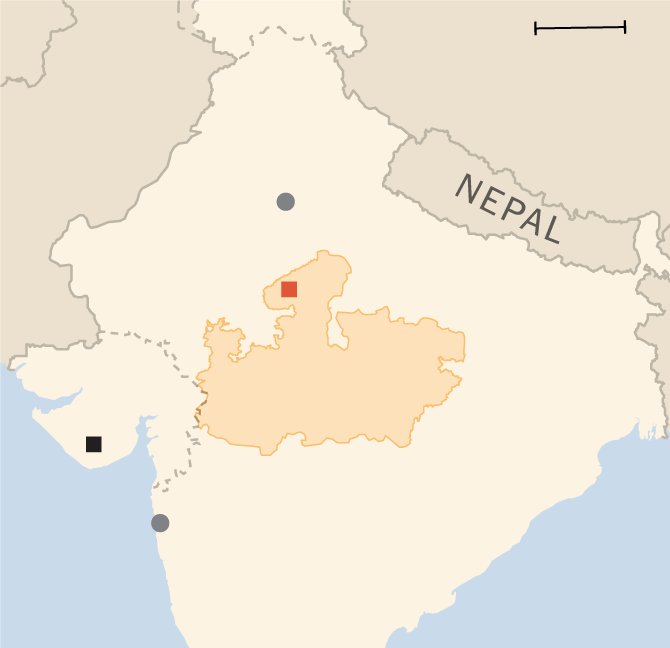 The cheetah species dates back about 8.5 million years, and the animals were once found in great numbers across Africa, Arabia and Asia. They now live exclusively in Africa, other than a few in Iran. Their population is estimated to be fewer than 8,000, down by half over the last four decades.

With habitat loss and other dangers leaving cheetahs vulnerable to extinction in Africa, many conservationists argue that it is wise to resettle some of the animals.

India’s government will spend roughly $11 million, with support from the Indian Oil Corporation, on the project over the next five years. The eight cheetahs were a gift from the government of Namibia. The plan is to translocate batches of cheetahs from southern Africa until India achieves a population of around 40.

“We should be thinking of the global cheetah population as a single fragmented population that needs to be conserved,” said Dr. Adrian Tordiffe, a wildlife veterinarian in South Africa who is helping to prepare a second batch of 12 cheetahs that India hopes to receive next month.

Apart from the cheetahs in South Africa’s national parks, some 500 of the animals are managed in privately owned reserves. As their numbers have grown, they have been exported to other African countries.

“What cheetahs need more than anything is protected space,” Dr. Tordiffe said. “India offers a wonderful opportunity for the cheetah in terms of protected space.”

Still, some experts wonder if India has enough of it for the cheetahs to thrive.

Kuno National Park was supposed to be the second home of some of the last remaining Asiatic lions. Prominent big-cat experts say the area is more suitable for those animals, which live together in prides, than for cheetahs, which in ideal conditions spread out over thousands of square miles.

Extensive work was done to restore the park’s ecosystem for lions, including paying the residents of some two dozen villages to relocate. But then the government of the state of Gujarat, where all the Asiatic lions live, opposed their being moved there, and the effort stalled. A plan to bring in cheetahs from Namibia was blocked by India’s Supreme Court in 2013.

Two years ago, though, the court ruled that cheetahs could be imported on an experimental basis. In that time, some scientists say, inadequate preparations have been made for the new inhabitants. The cheetahs’ arrival was delayed, in part, as wildlife workers struggled to catch and move the area’s leopards.

“This project is putting the cart before the horse,” said Ullas Karanth, a conservation zoologist at the Center for Wildlife Studies in Bengaluru, also known as Bangalore.

The animals “will have high mortalities, and a constant supply of new cheetahs will be involved,” he added. “I do not see this ‘rewilding’ of free-ranging cheetahs in India. It is more of a P.R. exercise.”

Yadvendradev V. Jhala, dean of the Wildlife Institute of India and the cheetah project’s lead scientist, acknowledged that the mortality rate among the cheetah pioneers in India could be higher than average. Already, only about 30 percent of cheetahs survive into adulthood.

Still, Dr. Jhala and other Indian scientists believe that bringing in a top predator will be good for the entire ecosystem. And they point to the country’s success in helping another big cat flourish. In 12 years, India doubled its tiger population, to nearly 3,000 in 2018.

The idea that India should repopulate its cheetahs emerged in 1952, five years after its independence from Britain, when India had its first wildlife board meeting in Mysore.

At the time, experts proposed importing the animals from Iran. When that did not come to pass, the idea of translocation was not raised prominently again until a symposium in 2009 organized by the Wildlife Trust of India in Rajasthan.

“It’s a very old idea,” Dr. Jhala said. “The science and art of reintroduction is recent,” he added, “and now India has the economic ability and the scientific know-how.”

The cheetahs from Namibia, five females and three males between the ages of 2 and 5, were selected because of their hunting skills, familiarity with humans and genetic profiles, said Laurie Marker, an American zoologist who is the executive director of the Cheetah Conservation Fund, the project’s main partner.

Two of the cheetahs are brothers. A female, Savannah, beloved at the cheetah fund for her luminescent eyes, was picked up from a farm in northwestern Namibia. That female and another of the same age were often found together in the same enclosure.

After a monthlong quarantine, the cheetahs will be released in Kuno, a 289-square-mile protected area. They will be fitted with satellite collars, but India’s parks are unfenced, so they can also roam surrounding forest land.

Males will be released first, with females initially kept in a 3.7-square-mile enclosure to anchor the males to the park. Dr. Marker said that the population’s hunting, eating and other behaviors would be closely monitored before they were released into the wild.

Kuno was chosen for its similarity in climate, rainfall and habitats to the private preserves in southern Africa. Prey, including deer, wild boar and antelope, is plentiful.

While cheetahs usually keep their distance from humans, the state forest department has engaged a network of influential people to be cheetah “mitras” — Hindi for friends — to sensitize villagers to their presence. Among their recruits is a notorious but influential bandit, Ramesh Singh Sikarwar, whose rap sheet includes 91 cases of murder and kidnapping.

During his bandit years, he lived in the jungles of Kuno and said he often defended wildlife from poachers.

Wearing a Kuno National Park baseball cap and an ammunition belt and cradling a rifle outside his farmhouse near the sanctuary, he said he was prepared to deter poachers again. “I’ve become cheetah mitra, and I will not allow them to hunt,” he said, adding, “If they will not listen, I will fire on them.”