I know that talking about all this is like talking about the Crusades to Middle School students. Boring, not relevant, move on…
I dove into the Marine Corp to avoid the draft–might not have been the most well thought out plan, but it worked out OK. Well, kinda.
My brother Bill is quoted a number of times in this great article published in the Spring edition of the Notre Dame University Magazine.
Brother Bill was looking down the barrel of the draft.
Friends of mine were becoming dead or broken by their tour in the jungle.
Read the following to refresh your memories on who we are and why we feel kinda beat up in 2020

“The Kent State shootings marked the end of the 1960s, and the beginning of our era of political polarization.

On Friday, May 1, 1970, just after noon, about 300 students at Kent State University, outside Cleveland, gathered in the grassy campus Commons to protest President Nixon’s expansion of the Vietnam War into Cambodia. As part of the protest, they buried a copy of the Constitution, a symbol of their outrage that Congress had never formally declared war on Vietnam or Cambodia, and they announced another rally, set for May 4.

Later that night, when the most audacious of the young protesters destroyed commercial property in downtown Kent, the town’s mayor asked Governor James Rhodes for assistance. Rhodes called in the National Guard. The next day, around 9 p.m., the campus building used by the Reserve Officer Training Corps, one of the Army’s primary recruiting tools during the Vietnam War, was torched, probably by a very small fringe of activists.

Student activists had long been at the forefront of the antiwar movement, and Kent State, with some 21,000 students, boasted a long tradition of radical protest, partly because of its proximity to Cleveland, then a stronghold of progressive labor. Town-gown tensions were palpable at Kent the day after the burning of the ROTC building. Rhodes primed polarized sentiments, calling the protesters “worse than the ‘Brown Shirt’ and the communist element,” labeling them “the worst type of people that we harbor in America.”

On Monday, May 4, activists awaited the noon rally to protest the guard’s presence on campus, as well as Nixon’s Cambodia invasion. But with the guard in control of the campus, the university announced the rally was prohibited. The students gathered anyway, facing off across a hilly green against a phalanx of guard soldiers.

The sky was cloudless, the spring air warm and still. As the morning wore on, the growing crowd of students, now numbering in the thousands, became feisty, and some taunted the soldiers. Just after noon, a group of guardsmen suddenly huddled together, retreated briefly, wheeled toward the right, turned in tandem and fired at the students for 13 seconds.

The students were not only unarmed; most didn’t realize that the guards’ rifles held live ammunition. Four students were killed: Allison Krause, Jeffrey Miller, Sandra Scheuer and William Schroeder. Nine others were injured. After 50 years, we still don’t know why the guard turned and fired. 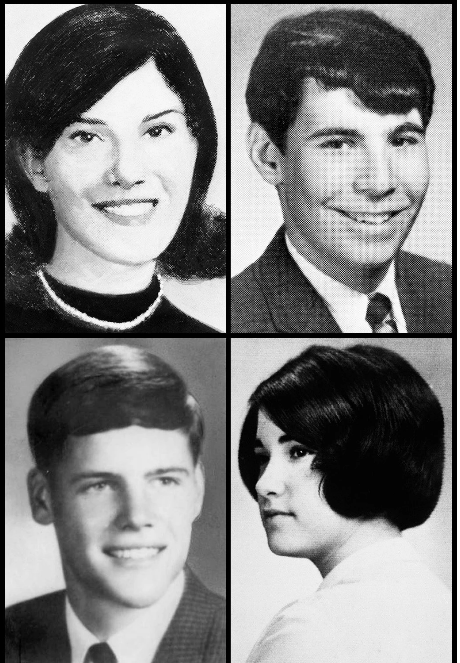 While Kent State was not the only instance of violence against student protesters, it immediately became a byword for state-sanctioned violence. Campuses nationwide erupted in protest. Krause, Miller, Scheuer and Schroeder became martyrs, their deaths memorialized by the band Crosby, Stills, Nash and Young in their song “Ohio.” The tremors were felt all the way to the White House; according to H.R. Haldeman, Nixon’s chief of staff, they precipitated the sense of political paranoia within the administration that set Watergate in motion.

Thomas M. Grace, one of the students shot on May 4, went on to become a historian. Among his books is a well-received history of the protests, “Kent State: Death and Dissent in the Long Sixties.” In it, he argued that the shootings and the mass student strike had three immediate, tangible effects.

First, the ensuing political pressure propelled Nixon to end the unwarranted Cambodian invasion earlier than anticipated, on June 30, 1970. Second, the horror of students dying at the hands of a militaristic state helped propel Congress to pass the War Powers Act in 1973, which curbed the president’s war-making authority. Third, the protests contributed to the ratification of the 26th Amendment a year later, which lowered the voting age from 21 to 18. Legislators recognized, not only that young adults old enough to be drafted should have the right to vote, but the civic awareness necessary for voting was evident in the acute appreciation of political problems that young people poignantly showed during the spring of 1970.

Looking back, 50 years later, we can also see clear but less tangible effects. Along with cultural touchstones like the Manson family murders and the concert at Altamont, Kent State marked the symbolic end of the 1960s, stretching from the optimism of John F. Kennedy’s inauguration through the March on Washington to the long hot summers of riots, assassinations and radical activism. If, as the sociologist Todd Gitlin noted, the decade was marked by both hope and rage, then the events of May 4 brought the sober recognition that neither could overcome the will of a militaristic state and a conservative political backlash.

Kent State did more than end an era; it also shaped a new one. As David Greenberg, a professor of history and journalism and media studies at Rutgers, explained, Kent State “left a legacy of disillusionment. Generations like mine and those after mine grew up in the shadow of the 1960s. We grew up without great expectations that our leaders would act valiantly, without a naïve or simple view of the military, without confidence that protest could bring about political change.”

Kent State also helped unearth a growing political polarization rooted in different views about the cultural changes wrought by the 1960s. The May 4 shootings were viewed very differently by conservatives and liberals; most conservatives endorsed the National Guard’s actions and at best wrote off the shooting as a tragic accident, at worst as the protesters’ just desert — a position that liberals and the left found unimaginable. “Just as many consider shootings by the police to be ridding the streets of ‘thugs,’ the killings at Kent State were also celebrated by many. ‘National Guard 4, Students 0,’ or ‘They Should have Shot 400’ were commonly voiced views,” Professor Grace wrote, finding a vicious split that is echoed today over everything from climate change to the Kavanaugh hearings.

We also need to recognize the way that Kent State is viewed through race. The students shot on May 4, all white, became martyrs; most people have forgotten that less than two weeks later, Phillip Lafayette Gibbs and James Earl Green, two students in Mississippi, were killed by police officers in the wake of a false rumor about the death of a civil rights leader. And while Kent State stands out as an exception — National Guardsmen killing white college students — over the years, state authorities have killed far more African-American protesters than whites.

Seen through that lens, Kent State was not an aberration at all, but a dramatic continuation of national afflictions — above all the willingness by the state to use force to quash dissent.

Robert Cohen, a professor of history and social studies at New York University, sees Kent State as a point on a line running from Woodrow Wilson’s censorship during World War I, Franklin D. Roosevelt’s internment of more than 100,000 Japanese Americans during World War II and McCarthyism, up to the repression of antiwar activism in the 1960s, all of which set the stage for the deployment of violent tactics on the campus of Kent State. That line continues, Professor Cohen says, through the civil liberties-abusing Patriot Act and Trump’s Muslim immigration ban, which was given the benediction of the Supreme Court.

Yet the better angels of our political nature persist. Fifty years after May 4, public expression of unpopular views remains endemic to democracy. On a host of issues, from the political failures to address climate change to President Trump’s abdication of responsibility to confront the coronavirus crisis, resistance remains vital, alive — and appropriate.

Kent State had planned a series of events to mark the 50th anniversary of the shootings, but the coronavirus outbreak forced administrators to cancel them. This year’s elaborately planned ceremonies would have served as a capstone, symbolically showcasing the ways that the university, aided by activist/scholars like Jerry M. Lewis, Alan Canfora and Laura Davis, has kept historical memory alive and evolving.

But the campus, largely empty of students and faculty, is quiet. An eerie silence will mark 12:24 p.m., the exact moment, 50 years earlier, when the soldiers opened fire. It will be, perhaps, appropriate — a moment to reflect, in our own freighted era, on the fragility and significance of the democratic ideals for which these students gave their lives.”

Richard M. Perloff is a professor of communication, psychology and political science at Cleveland State University. He has written books on persuasion, news and politics.